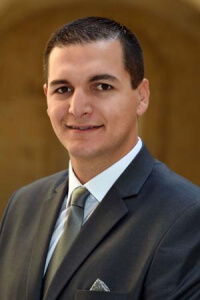 Mr Christopher Cutajar was born in 1985 and joined the Public Service in 2007. He obtained an Honours Degree in Nursing and later on pursued his studies by securing an Executive Master in Business Administration, both from the University of Malta.

He was directly active in the trade union sector between 2009 and 2014. During his time at the General Workers’ Union, he was the leader of the youth section and also sat on the union’s decision-making organ, the National Council. He was also elected on the Executive Committee of the National Youth Council, where he served as the Financial Officer for a one-year term.

Mr Cutajar started his experience in the public administration as from 2011, by serving as the Executive Secretary of the Fgura Local Council.

He was appointed Permanent Secretary for Transport and Infrastructure in June 2016 and was reconfirmed in his position when new Government formations took place. During this period, Mr Cutajar coordinated major projects such as the Triton Square project, which is a landmark at the entrance of the capital city Valletta. He also led a strategic restructuring process for the Public Works Department aimed at its revitalisation, by focusing on the delivery of sustainable projects for liveable communities. During this four-year term Mr Cutajar also served as the Deputy Chairperson of the Maritime Security Committee.

Mr Cutajar was appointed as Permanent Secretary for Foreign and European Affairs in June 2020. During this period, he was responsible for coordinating Malta’s Foreign Policy Strategy, whereby for the first time, the foreign policy of Malta was outlined in a strategic document.

In April 2022 this Ministry was redesignated as Ministry for Foreign and European Affairs and Trade.